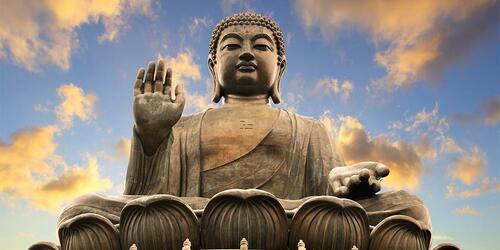 What do Buddhists believe?

There are various types of Buddhists with different beliefs and practices. However, generally speaking, all Buddhists believe the Four Noble Truths and the Triple Gem which form the foundation of the Buddhist belief system.

The Eightfold Path helps put these beliefs in practice and is often summarized as 'mindfulness', a sort of awareness of one's inner self and motives.

The Eightfold Path is:

Buddhists also value peaceful and harmonious living in relation to all that is around them. Because of this, they tend to have high moral standards. Many follow the Five Precepts as a foundation of their moral living, which are:

Finally, most Buddhists believe in the law of karma which teaches that every good deed will have a good result and every evil deed will have an evil result. This belief in karma and the desire to escape suffering motivates many Buddhists to meditate, perform ceremonies and do good deeds to obtain good merit, the currency of the karma system.

Who was the Buddha?

Buddhism takes its name from its founder who was called “The Buddha”, a title literally meaning 'the enlightened one' or 'him who is fully awake'. His name was Siddhartha Gautama and he was born in 623 B.C. as a prince near the Himalayas in Lumbini in present-day Nepal.

History says that at his birth wise Brahmins predicted that he would either become a great ruler or an ascetic who would help many people. His father, the king, wanted to make sure he would be a ruler, so he lavished pleasures on him and protected him from seeing suffering for many years. During that time, Gautama married a princess named Yasodhara and had a son named Rahula.

One day Gautama slipped out of the palace and saw four scenes that changed his life. He saw an old man, a sick man, a corpse and an ascetic. The first three scenes brought home to his heart the striking reality that age, sickness and death come to all. The fourth scene gave him a hint of a possible escape from the cycle of death and rebirth.

Gautama left the luxuries and privileges of the palace, renouncing everything in order to search out a way of escape from suffering and death. He diligently practiced self-mortification and meditation until he almost died. While nearly starving, Gautama recognized that extreme asceticism was as useless as pleasure seeking. So he ate then sat down beneath a Bodhi tree and determined to meditate until he could find a better way.

According to the story, on his 35th birthday he attained enlightenment, destroying all mental impurities and gaining perfect understanding into all realities, therefore called “the Buddha,” “fully awake” or “enlightened.” He continued to reflect on his insights for seven weeks and determined to spend the rest of his life helping others move toward the same.

The Buddha sent out 60 disciples to teach others and spent 45 years in active ministry. He died at age 80 in 543 B.C. His last words were “Verily do I say unto you: Perishable are all conditional things. Work out your way with diligence.”

One Buddha, Many Variations

There are two major divisions in Buddhism: Theravada and Mahayana. Theravada Buddhism is more conservative in its beliefs, claiming to hold more closely to the Buddha’s original teachings. It is primarily practiced in Sri Lanka and Southeast Asia. Mahayana Buddhism is considered to be more liberal and is practiced more in China, Japan and Korea. Mahayana is further divided into various sects such as Pure Land, Nichiren, and Zen. Some people classify a third division as Vajrayana, which is practiced primarily in Tibet and Mongolia as well as in parts of China and Russia. However, others recognize Vajrayana as a part of the Mahayana branch.

Tibetan Buddhism has been popularized in the West by the Dalai Lama with his emphasis on moral and ethical elements that foster tolerance and peace. His focus has greatly down-played the Tantric elements and magic central to the Tibetan belief which as made it very appealing to Westerners searching for peace in this age of chaos.

Wherever it has gone, Buddhism has been tolerant of folk beliefs and has invariably been mixed with indiginous religious practices. For example, Hindu ceremonies and celebrations are practiced in many Buddhist countries. And in other countries, animistic and ancestral worship practices play a central role in people’s lives.

The following websites and books have lots of general information about Buddhism: