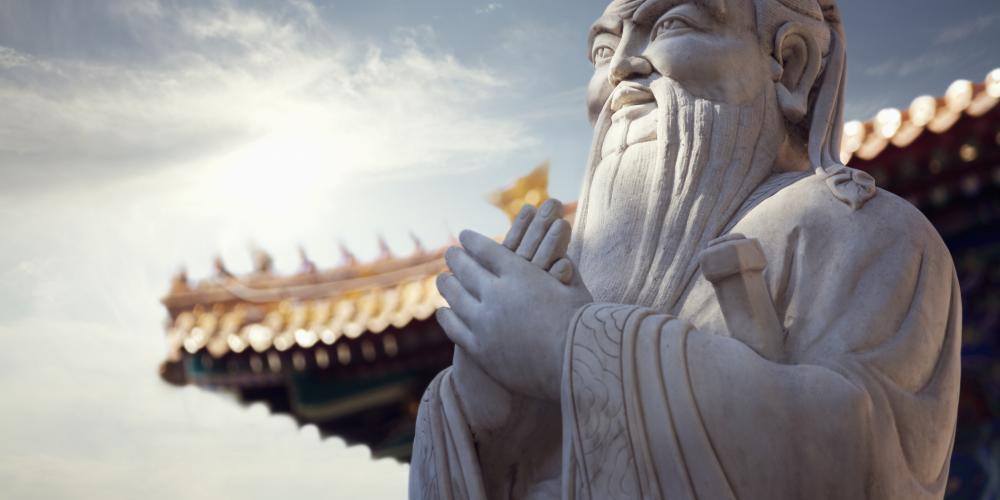 Confucianism is a philosophy that originated in China around 2000 years ago, and it continues to have a big influence in Chinese society in our modern day. While a complex philosophy, the basic focus of Confucianism is on social order through the maintanance of proper sociatal relationships. There are five relationships that Confucianism recognizes: ruler and subject, parent and child, husband and wife, older brother and younger brother, and friend to friend. The first four relationships are based on hierarchy. The older, wiser, more educated is to treat the younger, less experienced, less educated with kindness, gentility, humane consideration and benevolence. The response of the recipient is to show piety, humility, obedience, deference and loyalty. Confucious taught that when each person acts in accordance with his or her status and position in society, there will be social harmony.

Confucianism also promotes education, scholarship and self improvement. At the height of Confucianism's popularity, social leaders were chosen through an examination system in which examinees had to demonstrate their education and abilities, including their understanding and practice of the Confucian teachings. The higher scoring participants were given positions of higher status.

Today, Confucian philosophy continues to impact Chinese culture and society. Being one the Three Teachings along with Taoism and Buddhism, Confucian philosophy is seen in family and social relationships, in the view of and respect for authority, and in the Chinese respect and veneration of ancestors.

Confucianism had it's beginnings in China during the Chou Dynasty, around B.C. 550. The Chuo Dynasty had been successful in uniting and harmonizing the various tribes living along the Yellow River through what was called the Ritual-Music Culture. But after four centuries, the culture failed and left the dynasty in a state of chaos and confusion, and the great intellectuals of the time scrambled to make sense of what was happening and implement strategies to reinstate order and harmony and save the dynasty. One of those intellectuals was K'ung Fu-tsu.

K'ung Fu-tsu, or Confucius was serving as prime minister of the State of Lu. He saw that chaos had resulted from a falling away from the rituals and practices of the Ritual-Music Culture. So at the age of 56, he left his position as prime minister and traveled throughout the dynasty promoting and calling for a revival of the Ritual-Music Culture. After twelve years he realized that his travels were not bring the success he had hoped. So he returned home.

Confucius began to question whether the concepts of 'right' and 'wrong' were static, or whether what was right and what was wrong was ever changing. He began to believe that deep at the heart of humanity was an innate goodness and that if people would only consider their morality and act responsibly in the face of problems, harmony and peace would be the result. This belief in a deep-rooted goodness was called jen.

Confucius started to share his new beliefs. He taught that if individuals based their decisions and actions on their jen, they could live an ideal state of life. He began promoting the need for individuals to transform themselves through self-reflection, self-cultivation and moral responsibility. This new teaching took the pressure off of the government to impose laws regarding right and wrong, and put the responsibility on the individual instead. He saw that each person had the power within to improve himself. Therefore, the solution to chaos and the crumbling social structure was within each individual.

Mencius continued to refine Confucius' teachings. He proposed that heaven could be achieved by continuing to nuture jen or what he expanded and termed hsin-hsing, or 'mind-heart nature'. He came to believe that human nature is good and that if allowed to follow one's feelings, individuals would choose to do good.

In the second century B.C., Emperor Han Wu-Ti adopted Confucianism as the offical ideology of China. In B.C.124, the imperial academy was founded and the Confucian Code of Conduct became the theme of edcuation.

During the second century A.D., Buddhism entered China. Buddhist beliefs and teachings took hold quickly and dominated religious practice for the next 350 years. But during the Sung Dynasty (960-1368 A.D.), Confucianism was revived as 'Neo-Confucianism'. This new revived form of Confucianism was infused with Buddhist teaching and became the orthodox ideology until the beginning of the Republic of China in 1911.

During the early 1900s, Chinese intellectuals began blaming Confucianism for China's failure to modernize. They began looking for a new ideology which would help them catch up with the rest of the modern world. It was at this time that Mao introduced the communist ideology. His ideology was embraced and in 1949, the People's Replublic of China was founded. Confucianism was seen as counter-revolutionary.

This new excitement was short-lived, however, and in the 1980s there was a new trend toward reflecting on traditional Chinese values. In the early 1990's, Confucianism was reaffirmed.

The following websites and books have information about Confucianism: