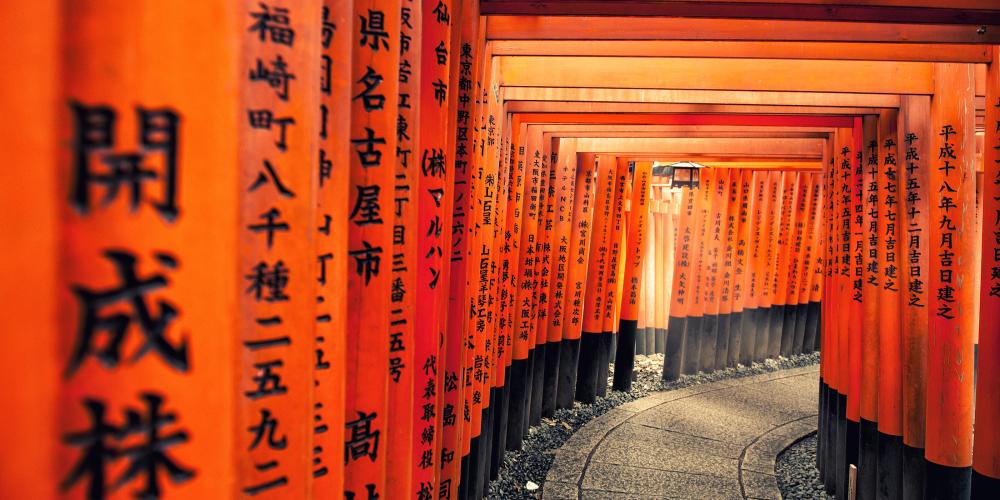 Unlike the other major religions in Asia, Shinto is not considered an 'founded' religion. Instead, it grew from the formalization of various ancient Japanese religious and social customs that typically centered around both agricultural festivals and respect for various kami, or gods (roughly translated). Shinto means kami no michi, or "way of the Gods".

The kami are somewhat ambiguous beings, a sort of mix of force of nature, spirits of ancestors and the essence of virtue and goodness that man should strive towards. As a result, the kami are numerous and the term can apply to a specific kami or to a group of kami. Should the kami be clearly understood and defined they would cease to be kami.

In ancient Japan, each community had it's own sacred kami and the associated rituals and ceremonies varied from region to region and community to community. The belief and worship of the kami led to a great respect and reverence for nature and for life. Communities depended on local shamans to communicate with the kami and combat evil spirits.

In the fifth century, Buddhism, Taoism and Confucianism reached Japan and began to threaten traditions related to kami. So the various communities organized all the kami into a pantheon of deities and established a system of shrines and ritual. Debates about Buddhism led to clan wars and eventually led to the assassination of the emperor in 592. The winning clan leader put his Buddhist niece on the throne. Her chosen regent, Shotoku, made Buddhism the national religion in an effort to consolidate the nation. However, in the late 600s, several emperors updated Shinto rites and rituals and elevated the status to be equal with Buddhism.

During this revival of Shinto beliefs and practice, the kojiki was written. The kojiki includes a creation myth which said that two kami, Izanagi and Izanami married. They went to the ocean and thrust a spear into the waves, and when they pulled the spear out of the ocean, water dropped from the tip and formed the Japanese islands. Izanagi and Izanami descended to the islands and there created more kami. After several generations of kami, Amaterasu, the sun goddess was born who became the great-grandmother of Jimmu - the first Japanese emperor.

In 794 AD, Buddhism began to mix with Shinto beliefs. Shinto kami were viewed as traces of Buddhist reality. This mix of religions somewhat weakened the Shinto beliefs and again promoted Buddhism as the state religion. But in the late 1200s, Shinto again saw a revival. Emperors began to seek more and more power and warlords began to reign. These warlords represented samurai - the warrior class. Their lifestyle combined several religious traditions that created a unique ethic of self-discipline, loyalty, courage and honor. The Yui-ichi school was established and promoted the superiority of Shinto beliefs. The school adopted honji suijaku, "true nature, trace manifestation". In other words, they taught that Buddhist deities were traces of Shinto belief - or kami. Not the other way around.

In 1889, the Japanese Constitution declared Shinto to be non-religious. It was seen as a set of ideals and values, rather than a set of fundamental beliefs. The government adopted Confucian teachings of loyalty and filial piety. It also adopted samurai values such as self-discipline.

Today, Shinto practice is varied. Most if not all communities have their own community shrine which contain shintai or an object such as a mirror, jewel or sword believed to be the community's link or access to the kami. Shinto practice typically centers around these shrines. Shintai can also be large, unhoused objects such as the Japanese Imperial Regalia, Mount Miwa, Mount Nintai, Nachi Falls and Meoto Rock. Perhaps the most famous shintai is Mount Fuji.

Ritual purity is extremely important to Shinto practice as it is believed that the kami will only bestow blessings when proper purification rites, harai, are followed. Shrines are entered through a special gate called a torii which is a symbol to those entering that they are entering sacred grounds and must purify themselves. Those who enter typically perform a ritual cleansing which includes washing ones hands and mouth.

More than just a religion, however, Shinto prescribes a sense of proper social order and etiquette. It promotes a concern for right practice, purification and life celebration. It is seen as a way of life, the essence of what it is to be Japanese.

The following websites and books have information about the Shinto tradition: