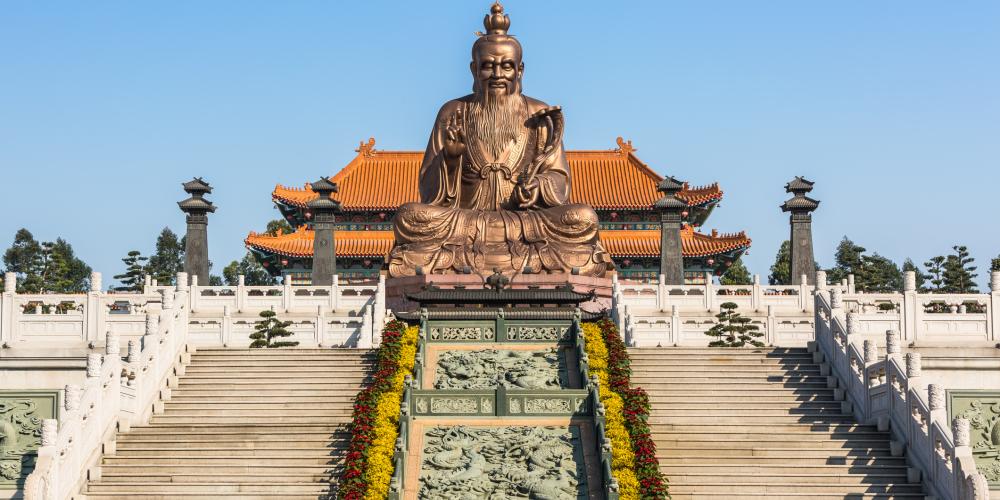 Taoism is a complex worldview system that has its roots in ancient China. While still practiced in Asia, it is often blended with Buddhism and Confucianism to form a religious belief system that is hard to separate into distinctly Taoist, Buddhist or Confucian practices.

Taoism based on a system of beliefs established by Lao Tzu, a contemporary of Confucius. At the time, the social/political structure of the ancient Chou Dynasty was crumbling and intellectuals of the day were scrambling to make sense of what was happening and implement strategies to save the dynasty from ruin. The Chou dynasty had been established on a set of principles known as the Ritual-Music Culture. The basic premise of the culture was that there were heaven-mandated ways of doing things that formed a set of ‘rituals’ or li. The idea was that if the rulers promoted civility, appropriateness and virtue among their people, practiced through the li, harmony would result. The strategy worked for a time, but after four centuries it began to fall apart. Confucius, a respected intellectual and government leader of the time, traveled extensively promoting the values and benefits of the Ritual-Music culture, in an attempt to revive the floundering Ritual-Music Culture and save the dynasty. (see Confucianism)

Lao Tzu disagreed with the Ritual-Music Culture strongly. In fact, he blamed the Ritual-Music Culture, and Confucius who was the Culture’s strongest advocate, for the chaos that was now endemic and threatening to destroy the dynasty. Instead, he believed that external laws are placed in reaction to broken inner laws and therefore only served to superficially cover the problem. Harmony could never result. The answer, he proposed, was found in Tao and the principle of wu-wei (‘purposeful inactivity’). The Tao, he taught, was both a force and a set pattern or direction of all things that was set by heaven or nature. Just as a river flows at will, so things in life find their own course. Our task as humans, he believed, was to participate in wu-wei, what he identified as purposeful inactivity, and essentially ‘go with the flow’. In other words, one would find harmony and peace only as he or she aligned oneself with and did not resist Tao. His book, Tao Te Ching became the Taoist scripture.

Sometime between B.C. 399-295, Chuang Tzu further developed Lao Tzu’s teaching of Tao and gave it a mystical nature. He wrote another book developing his new insights about Tao called Chuang Tzu, which became the second scripture of the Taoist religion.

From there Taoism developed into what could be considered ‘magical Taoism’. New thoughts and practices appeared as people began to give literal interpretation to the Tao Te Ching and Chuang Tzu. The religion became specifically obsessed with developing techniques to harness and utilize the forces of Tao to achieve magical powers and immortality. New practices appeared such as using ch’I, or one’s inner vital energy, to purify oneself and obtain immortality. Alchemy was introduced with the belief that natural elements could be made into an elixir of life. There was also a belief in a mythical island named P’eng Li which was believed to be inhabited by immortals. It was thought that if the island was ever found, humans would then have access to the island’s immortality-inducing drug. These practices and a variety of others were combined and became the basis of the practice of Taoism until around A.D. 300, when philosophical Taoism made a resurgence.

Scholars began studying the original Tao Te Ching and Chuang Tsu scriptures and developed a new Taoist movement called ‘Pure Conversation’ that was a revival of the pre-magical Taoist beliefs and traditions. This revived ‘Philosophical’ Taoism is the current Taoism practiced today.

The Beliefs of Taoism

Tao is mysterious. If one thinks he understands it, he has oversimplified it. Tao is the force of existence, yet is also non-existent. Tao is both being and non-being. in Tao Te Ching, Lao Tzu compared it to a spoon which is useful because of the emptiness (non-being, non-existence) found within the curve (being, existence).

Tao is a force of existence and the pattern and way in the world it created. It is an underlying flow that leads towards harmony, health and peace.

Te is the set pattern within each thing that makes it unique. It is what connects things to Tao. Taoism teaches that we must accept our Te and the Te in all other things and beings. Te simply ‘is’ and must be accepted. To force conformity to one’s own ideas and perceptions of right and wrong on others is to oppose their Te and Tao and the natural response will be resistance.

Wu-wei – the Principle of Inactivity

Wu-wei is the action of allowing Te to take its natural Tao course. It’s an overall attitude of non-interference.

The yin-yang is an important belief for the Chinese in that it is the root of success and failure. Divination is still commonly practicied and yin-yang are at the heart.

The following websites and books have lots of general information about Taoism: